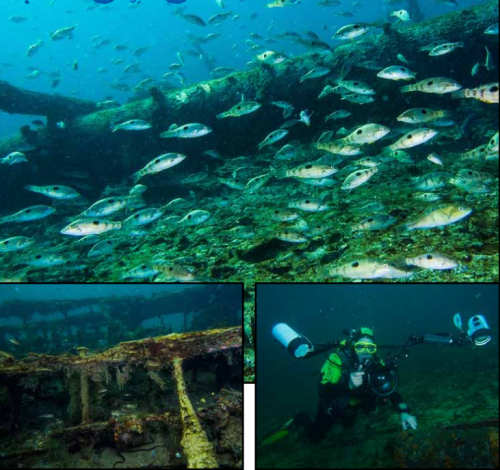 This weekend we headed off in Reflection with no real destination in mind, just stooging around to get a couple of dives and checkout camera and dive gear before we head to warmer waters in Vanuatu next week.

The skies were clear and blue, a slight breeze and the water a not so lovely browny-green colour so we weren’t hoping for much. We got out to the pinnacles but it was sloppy and dirty so we thought we would head back into East Bay to see if it was any better. And it was – much. We headed for our old friend the Prince Of Wales shipwreck, lying just of the beach in only 6-8 meters (depending on tide), some of the debris can be seen on the beach, but what’s left of the rest of her makes for an interesting, if very shallow dive.

The viz here was great, even from the boat at anchor in 10 metres we could clearly see the bottom, so Russell & I quickly jumped in leaving Eric and Gizmo as boatman/dog. Dropping down we swum along until we reached the wreck, a hoard of spotted wrasse ventured out to greet us, with various sized moki lurking in the background.

The 50m length ship is now just a hulk, consisting mainly of timber and nails, her masts are still there lying alongside and she now forms a haven to a multitude of fish and invertebrate life.

It was the tapestry of colours that intrigued me most, the red and green weed that now adorn parts of the wreckage, between bright orange rust deposits and the blue sky above. Resting on the timber a variety of colourful triplefin cautiously watch from their stations with the juvenile blue cod being far more brave and aggressive. Loitering at the edges of the wreck larger cod and the occasional carpet shark patrol the sandy bottom. Sadly my camera battery didn’t co-operate so after about 20 minutes I headed back to Reflection – least ways I know not to take that battery away with me now.